Private Condo Price Was Slashed by Developers About 5-10%

Private Condo Price Was Slashed by Developers About 5-10%.

Reported TODAYonline, private condominiums launched before and after the introduction of new property curbs are decreased their unit prices by around 5.0 to 10 percent. 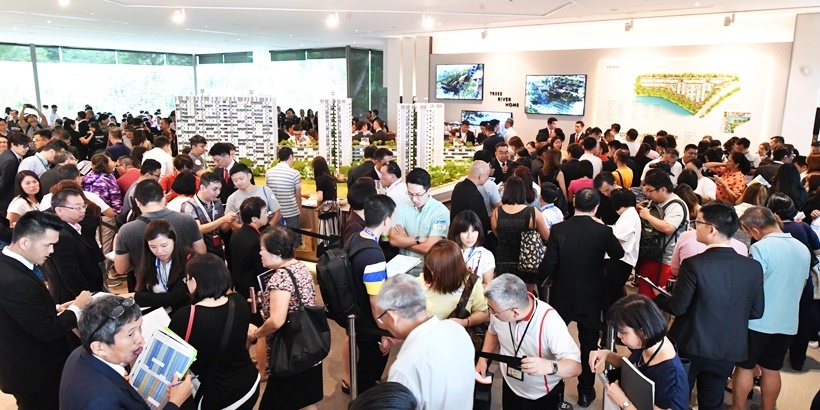 A crowd of buyers at the recent launch of The Tre Ver in Potong Pasir. (Photo: UOL Group)

Dr Tan Tee Khoon, executive director at Knight Frank said that "The price sweeteners are there to cushion the immediate of cooling measures and create an urgency to buy."

For example, the condo development in Upper Bukit Timah - Daintree Residence decreased its average price by 5.0 percent. Particularly, from $1,800 psf to $ 1,750 psf. After the new cooling measures took effect on 6 July, this is the first private residential project in Singapore to be rolled out.

The Tre Ver at Potong Pasir has launched on 4 August. During that time, units were sold at an average price of $1,550 psf. Compared with the other development nearby, Park Colonial, this is 10 percent cheaper. The sold units at an average price of Park Colonial is $1,750 psf. Notably, the latter’s developer brought forward the project’s launch to the evening of 5 July before the new curbs took effect.

With Affinity @ Serangoon in Yio Chu Kang, the discount percentage is 5.0 percent and 7.0 percent for its one-bedders and two-bedroom condos respectively. However, only the next 20 units sold since July 12 are applied. Since that date, the selected units at Martin Modern in River Valley also discounted about 5 percent. Lastly , a condo development at Queenstown - Margaret Ville has discounted $20,000.

Huttons Asia’s research head Lee Sze Teck and Knight Frank’s Tan both believe that units prices are unlikely to fall further in the coming months as construction and land costs are already locked in, even though property developers have slashed prices at their private residential projects. The residential sites acquired at “unprecedented prices”.